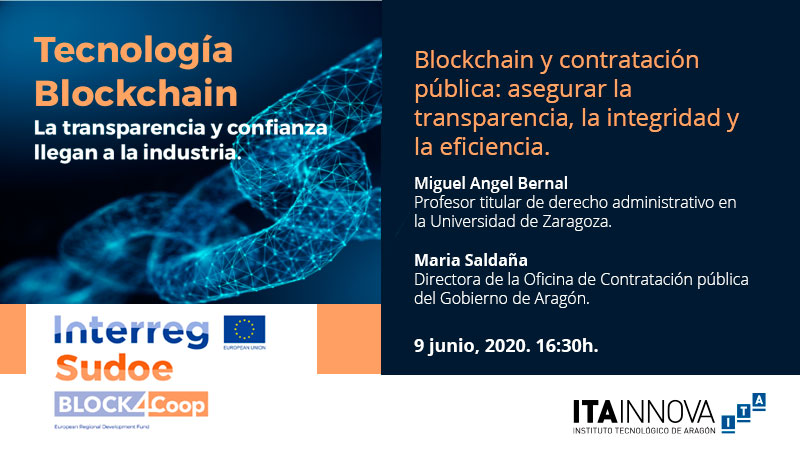 The private sector is beginning to take a look at Blockchain technology. However, there are very few user experiences in the public sector. The public tender distributed ledger system is a project that was started up in 2018 by the Government of Aragón, making it the most important public administration Blockchain technology user at the time. It is a pioneering project, as it uses highly disruptive technology in such an important field as public tendering, which represents 18% of Spain’s GDP. It also serves as a point of contact with companies, for whom, in this case, the use of Blockchain technology ensures transparency in the procedure and integrity of its offers, values that are added to the increased efficiency of administrative procedures in public tendering.

In the afternoon of June 9 we will have the ideologist and executor of this project, which is currently being used to process the many tenders managed by the Government of Aragón.

AGENDA
– Framework and next steps for the BLOCK4Coop Project
– The added value of distributed ledger technology applied to administrative procedures.
– The distributed ledger of public tender offers of the Government of Aragón.
– Questions from the floor.

Miguel Ángel Bernal: Professor of administrative law at the University of Zaragoza. His work has been dedicated to research, fundamentally in the field of public tendering, and has led to the publishing of 50 works on this subject. Member of the ADESTER research group recognised by the Government of Aragón. Executive Secretary at the Public Tendering Observatory (obcp.es). During the last term of office he held the position of General Manager of Tenders, Heritage and Organisation at the Government of Aragón.

The project is funded by the European Regional Development Fund (FEDER) 2017-2020 as part of the third call to the Southwestern Europe Territorial Cooperation Programme.